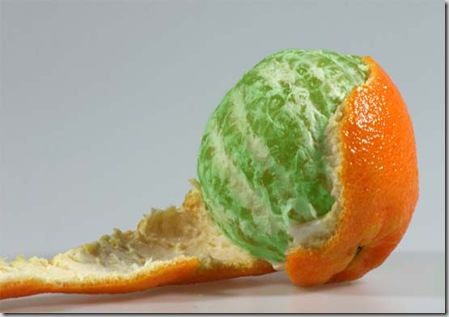 Cannabis Oranges?: In the summer of 1984, 10th-grader Irwin Nanofsky and a friend were driving down the Apalachee Parkway on the way home from baseball practice when they were pulled over by a police officer for a minor traffic infraction.

After Nanofsky produced his driver’s license the police officer asked permission to search the vehicle. In less than two minutes, the officer found a homemade pipe underneath the passenger’s seat of the Ford Aerostar belonging to the teenage driver’s parents. The minivan was seized, and the two youths were taken into custody on suspicion of drug possession.

Illegal possession of drug paraphernalia ranks second only to open container violations on the crime blotter of this Florida college town. And yet the routine arrest of 16 year-old Nanofsky and the seizure of his family’s minivan would inspire one of the most controversial drug-related scientific discoveries of the century.

Meet Hugo Nanofsky, biochemist, Florida State University tenured professor, and the parental authority who posted bail for Irwin Nanofsky the night of July 8, 1984. The elder Nanofsky wasn’t pleased that his son had been arrested for possession of drug paraphernalia, and he became livid when Tallahassee police informed him that the Aerostar minivan would be permanently remanded to police custody.

Over the course of the next three weeks, Nanofsky penned dozens of irate letters to the local police chief, the Tallahassee City Council, the State District Attorney and, finally, even to area newspapers. But it was all to no avail.

Under advisement of the family lawyer, Irwin Nanofsky pled guilty to possession of drug paraphernalia in order to receive a suspended sentence and have his juvenile court record sealed. But in doing so, the family minivan became “an accessory to the crime.” According to Florida State law, it also became the property of the Tallahassee Police Department Drug Task Force. In time, the adult Nanofsky would learn that there was nothing he could do legally to wrest the vehicle from the hands of the state.

It was in the fall of 1984 that the John Chapman Professor of Biochemistry at Florida State University, now driving to work behind the wheel of a used Pontiac Bonneville, first set on a pet project that he hoped would “dissolve irrational legislation with a solid dose of reason.” Nanofsky knew he would never get his family’s car back, but he had plans to make sure that no one else would be pulled through the gears of what he considers a Kafka-esque drug enforcement bureaucracy.

“It’s quite simple, really,” Nanofsky explains, “I wanted to combine Citrus sinesis with Delta 9-tetrahydrocannabinol.” In layman’s terms, the respected college professor proposed to grow oranges that would contain THC, the active ingredient in marijuana. Fourteen years later, that project is complete, and Nanofsky has succeeded where his letter writing campaign of yore failed: he has the undivided attention of the nation’s top drug enforcement agencies, political figures, and media outlets.

The turning point in the Nanofsky saga came when the straight-laced professor posted a message to Internet newsgroups announcing that he was offering “cannabis-equivalent orange tree seeds” at no cost via the U.S. mail. Several weeks later, U.S. Justice Department officials showed up at the mailing address used in the Internet announcement: a tiny office on the second floor of the Dittmer Laboratory of Chemistry building on the FSU campus. There they would wait for another 40 minutes before Prof. Nanofsky finished delivering a lecture to graduate students on his recent research into the “cis-trans photoisomerization of olefins.”

“I knew it was only a matter of time before someone sent me more than just a self-addressed stamped envelope,” Nanofsky quips, “but I was surprised to see Janet Reno’s special assistant at my door.” After a series of closed door discussions, Nanofsky agreed to cease distribution of the THC-orange seeds until the legal status of the possibly narcotic plant species is established.

Much to the chagrin of authorities, the effort to regulate Nanofsky’s invention may be too little too late. Several hundred packets containing 40 to 50 seeds each have already been sent to those who’ve requested them, and Nanofsky is not obliged to produce his mailing records. Under current law, no crime has been committed and it is unlikely that charges will be brought against the fruit’s inventor.

Now it is federal authorities who must confront the nation’s unwieldy body of inconsistent drug laws. According to a source at the Drug Enforcement Agency, it may be months if not years before all the issues involved are sorted out, leaving a gaping hole in U.S. drug policy in the meantime. At the heart of the confusion is the fact that THC now naturally occurs in a new species of citrus fruit.

As policy analysts and hemp advocates alike have been quick to point out, the apparent legality (for now) of Nanofsky’s “pot orange” may render debates over the legalization of marijuana moot. In fact, Florida’s top law enforcement officials admit that even if the cultivation of Nanofsky’s orange were to be outlawed, it would be exceedingly difficult to identify the presence of outlawed fruit among the state’s largest agricultural crop.

Amidst all of the hubbub surrounding his father’s experiment, Irwin Nanofsky exudes calm indifference. Now 30-years-old and a successful environmental photographer, the younger Nanofsky can’t understand what all of the fuss is about. “My dad’s a chemist. He makes polymers. I doubt it ever crossed his mind that as a result of his work tomorrow’s kids will be able to get high off of half an orange.”

We at Different Weed are unable to verify the claims of the creation of THC Oranges, although we can confirm that it is scientifically possible to create a THC Orange. The process is well known and has been confirmed as possible by many scientists, so whether Nanofsky’s claims are true or not, there may well be a THC Orange out there somewhere.

How to design a Cannabis-equivalent citrus plant:

Step One:
Biochemically isolate all the required enzymes for the production of THC.

Step Three:
Clone genes into an agrobacterial vector by introducing the desired piece of DNA into a plasmid containing a transfer or T-DNA. The mixture is transformed into Agrobacterium tumefaciens, a gram negative bacterium.

Step Four:
Use the Agrobacterium tumefaciens to infect citrus plants after wounding. The transfer DNA will proceed to host cells by a mechanism similar to conjugation. The DNA is randomly integrated into the host genome and will be inherited.

A Doctor of Biochemistry has quoted saying “cannabis doesn’t just have Delta-9-THC, it has an incredibly wide variety of other cannabinoid products that are similar and possibly psychoactive (not enough research has been done on them to confirm or refute that). Tetrahydrocannabinolic Acid Synthase, the primary enzyme that creates THC, is well known. The Journal of Plant and Cell Physiology that shows that THC Acid Synthase is produced extensively in the grandular head of the trichomes. (see the journal here). A savvy biochemist could use this info to extract and sequence the enzymes, create a genetic vector with their protein code, and inject that vector into another plant. In fact, it’s was done and published in 2007″. (see the proof here)