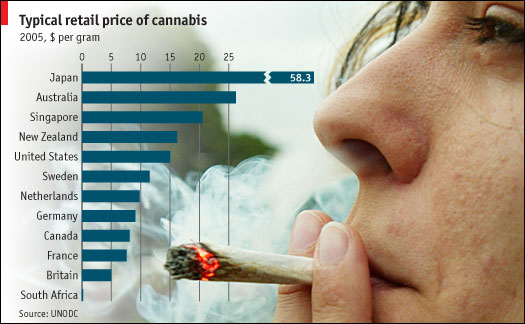 Above is a table showing the average price of cannabis per gram by country. One strange fact is that weed is cheaper in the UK and Canada than it is in Holland. If you live in Japan, its probably best to grow your own, as they pay a massive $58 per gram! South Africa has the cheapest prices as you can pretty much grow weed in your backyard there with the greatest of weed. I’ve heard they buy by the carrier bag there rather than by the quarter or half.

In a recently released survey, 13,8 percent of the 10th graders in the US reported smoking cannabis in the last 30 days (considered as “current use” by researchers), while only 12.3 per cent smoked cigarettes. For eighth and 12th year, cigarettes still use exceeded the marijuana, but the gap narrowed to insignificance.