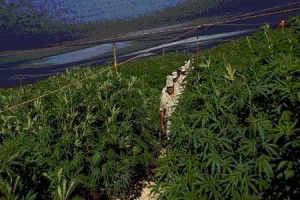 Mexican soldiers have reportedly uncovered the largest marijuana plantation ever detected in the country in the northwestern state of Baja California.

The huge field, covering almost 300 acres (120 hectares), sheltered under black screen-cloth in a huge square on the floor of the Baja California desert, located more than 241 kilometers (150 miles) south of the border city of Tijuana, Reuters quoted Mexico’s Defense Department officials as saying on Thursday.

Army Gen. Alfonso Duarte said the discovery was made on Tuesday after government soldiers on the ground reached the isolated area.

“We estimate that in this area, approximately 60 people were working. When they saw the military personnel, they fled,” Duarte said.

Six suspects were arrested later at a military checkpoint. No arrests were made at the scene.

The men tending the pot plants had dug a well at the barren site and pumped water through hoses to irrigate the crop.

It is estimated that drug traffickers could have harvested about 120 tons of marijuana from the plantation, worth about USD 160 million.

The recently found marijuana plantation is four times larger than the previous record discovery by Mexican authorities at a ranch in northern Chihuahua state in 1984. 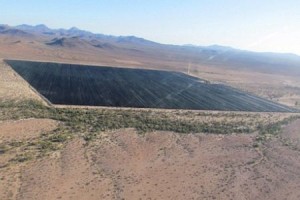