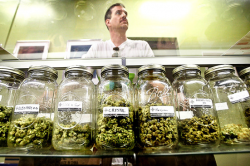 Marijuana could soon be Legalized in Copenhagen if approved by the Danish parliament at the start of next year, could make the city the first to fully legalise, rather than simply tolerate, marijuana consumption.

Marijuana is already sold openly on the streets of Christiania, a self-proclaimed ‘free town’ in the city centre, despite the closure of the neighbourhood’s Amsterdam-style coffee shops in 2004.

But marijuana has never been officially decriminalised and those caught in possession of even small amounts face fines of up to £450.

“We are thinking of perhaps 30 to 40 public sales houses, where the people aren’t interested in selling you more, they’re interested in you,” said Mikkel Warming, the Mayor in charge of Social Affairs at Copenhagen City Council. “Who is it better for youngsters to buy marijuana from? A drug pusher, who wants them to use more, who wants them to buy hard drugs, or a civil servant?”

The City Council voted on Thursday night, by a margin of 39 votes to nine, to empower Mr Warming’s Social Affairs committee to draw up a detailed outline of how the plan would work.

The proposal will then be sent to to the Danish Parliament for approval early next year.

“We want to make it a little bit more concrete what kind of decriminalisation we want: should it be a public buying system, should there be an age limit?” Mr Warming explained.

He said he was opposed to instituting cannabis cafés, where marijuana use is tolerated, despite it remaining illegal to grow and import the drug.

This, he argued, would leave the revenues, which are estimated at £200m, in the control of the city’s notorious biker gangs.

“We don’t want an Amsterdam model. We want a way to make it legal to import or grow marijuana.” he said.

Cannabis possession and production in the Netherlands are still punishable by fines. Its notorious coffee shops are also illegally but are tolerated.

The Danish parliament voted down a previous proposal submitted by Copenhagen City Council three years ago.