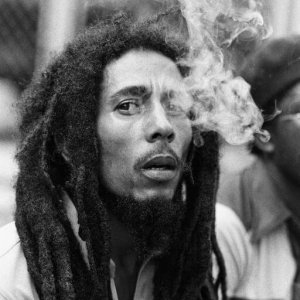 Bob Marley has been one of the key figures in cannabis culture over the past 60 years. Much of his music took inspiration from marijuana, and many cannabis smokers have taken inspiration and meaning from his music. He equated condemnation of cannabis with blasphemy. How could a plant created by God be made illegal by humans? “You mean they can tell God that it’s not legal?” he once asked a Canadian journalist. He is the key figure of reggae music and credited with helping the spread of both Jamaican music and Rastafarian-ism to a global audience.

Bob Marley was born in Jamaica in 1945 by an English father and Jamaican mother. He released numerous albums first with the group Bob Marley and the Wailors, and later as a solo artist.

The feeling, ethics and tempo of Reggae has always been synonymous smoking weed, and tracks such as “Jammin” have become almost symbolic of marijuana.

By popularizing reggae music and its marijuana-celebrating lyrics, Bob Marley prompted many people to question anti cannabis laws and propaganda, and encouraged them to take a fresh look at the evidence. Bob used his music to celebrate and share what he loved and millions of people worldwide can connect and associate with the vibes and feelings of his cannabis inspired music. Bob Marley is a true cannabis legend.