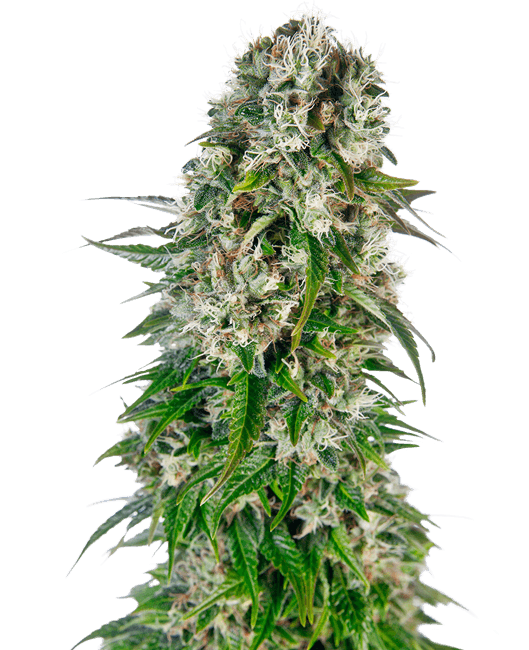 Big Bud Auto is our highest-yielding autoflowering strain, which explains its popularity! It produces huge, weighty buds, which are completely covered in resin. The scent is distinctive too; sweet, earthy and spicy, with a generous hint of skunk. As for the high? It’s an indica-dominant variety (80%), so expect a deeply relaxing, intense body stone.Growth pattern of Big Bud AutomaticBig Bud Automatic cannabis seeds are 80% indica. Originally created in the US in the 1980s, Big Bud was taken to The Netherlands and then further hybridised and stabilised. Sensi Seeds brought it back to its roots, then added Skunk #1 and Northern Lights to its genetic background. The result? A high-yielding automatic variant, which produces a typically indica high. This is an autoflowering strain, which makes it ideal for novice growers. As an auto, it’s capable of thriving in most climates, and offers a faster flowering time too. Growers can expect 45-55 days of flowering in total, with a growth cycle of around 13 to 17 weeks. This is advantageous for anyone wanting swift results, or multiple harvests per year. Big Bud Auto is a medium-sized plant, regardless of whether it’s cultivated inside or out. Most plants will range from 90 to 130 cm; with those grown outdoors reaching slightly larger heights (of around 150 cm at most). Appearance-wise, they’re easily identified by their noticeable central cola and large, plentiful buds, which gather mostly around the stem and on the higher branches. Most autoflowering strains produce a lower yield than their regular or feminized counterparts. However, this strain offers impressively large harvests for an automatic variety. Indoors, plants often produce up to 400 – 450 g/m², with outdoor plants generating around 100 – 175 grams each. The distinctive buds are a key feature of Big Bud Automatic. They’re huge, and retain most of their size even after curing. The buds are also heavy; so heavy that they sometimes break the branches they’re growing on. As such, the plants may require some support during the later stages of flowering.As this is an autoflowering strain, it’s robust enough to be grown even in colder climates. It can of course also be cultivated indoors, or in a greenhouse.Effect, taste, and smell of Big Bud AutomaticBig Bud Automatic’s indica genetics are immediately detectable upon consumption. Users often report a heady, complete-body high, which is relaxing and intense. The 15% sativa element adds a hint of euphoria. The Afghan heritage of this plant makes itself known through its scent, which is sweet, musky and spicy. The aroma intensifies after harvesting and curing, and can also be tasted. Did you know?Big Bud Auto requires minimal training, as it grows extremely fast.It has such heavy buds that sometimes, plants will require additional support towards harvest-time.Bid Bud Auto is Sensi Seeds’ highest-yielding autoflowering strain.It comes in two other variants; Big Bud Regular and Big Bud Feminized.Big Bud is a prize-winning strain (Cannabis Cup – indica category).